The Senate has achieved its goal of passing landmark climate change and healthcare legislation through a process known as “budget reconciliation.” On August 7, the Senate passed the “Inflation Reduction Act of 2022” (IRA)” after more than a year of negotiations and compromises. Following more than 15 hours of debate and amendments coming to the floor, the legislation was passed by a vote of 51 to 50. The IRA includes policies focused on carbon emissions, prescription drug and healthcare costs, and corporate taxes, among other items.

Notably, the IRA passed without the inclusion of any harmful anti-immigrant amendments. AILA joined other immigration policy and advocacy groups in lobbying the Senate through the night to stand firm against the inclusion of any harmful amendments. An amendment that would have preserved the public health expulsion order known as “Title 42,” was narrowly defeated on a 50-50 vote threshold. In the days leading up to the vote, AILA had also issued a press statement urging Senators to Do No Harm to Immigrants.

A precursor bill attempting to use the budget reconciliation process was known as “Build Back Better” or “BBB.” It was larger in scope with provisions including affordable childcare, free community college for certain Americans and certain immigration provisions. However, Build Back Better’s immigration provisions were stymied by advisory opinions from the Senate parliamentarian. The opinions concluded different immigration proposals offered by Democratic Senators were not permissible under the Senate’s “Byrd Bath” rules.

The BBB also included many of legal immigration provisions AILA has been fighting for that would have helped family, employment, and DV visa backlogs (see our summary of those provisions in the original House bill). These provisions were not reviewed by the parliamentarian by were ultimately not part of the final text of the IRA.

While the fight for fairness and immigration relief continues, the passage of this historic bill in the Senate can be celebrated for not including amendments that would have been use to target immigrants, their families, and our communities.

How a Bill Becomes a Law

Share this AILA flyer on the multi-step process that a bill, including the reconciliation bill, must go through before it becomes an enacted law. 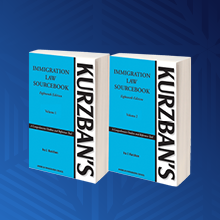