The Second Circuit upheld a prior injunction on the DHS Public Charge rule that Supreme Court had stayed, but limited its applicability to NY, CT, and VT. This injunction does not impact the nationwide injunction of the public charge rule related to COVID-19 issued on July 29, 2020, by the U.S. District Court for the Southern District of New York. (State of New York, et al., v. DHS, et al., 8/4/20)

The Supreme Court denied the motion to temporarily lift or modify its stay. But, the order noted that, “this order does not preclude a filing in the District Court as counsel considers appropriate.”

Due to the global pandemic caused by COVID-19, advocates requested that the Supreme Court temporarily lift or modify its stay to halt implementation of the Public Charge Rule during the national emergency concerning COVID-19 declared by President Trump. In the alternative, advocates requested that the Court clarify that its stay does not preclude the district court here from considering whether the new circumstances caused by the novel coronavirus warrant temporarily halting implementation of the Rule.

The Supreme Court issued a stay of the district court’s October 11, 2019 preliminary injunction, therefore allowing the DHS Public Charge Final Rule to go into effect nationwide except for in Illinois, where an injunction against the rule remains in effect. In a press release, Ken Cuccinelli, the Senior Official Performing the Duties of the DHS Deputy Secretary, stated: “We plan to fully implement this rule in 49 states and are confident we will win the case on the merits.” (DHS v. New York, 1/27/20)

As of January 28, 2020, neither USCIS nor DHS has posted guidance regarding this decision. AILA will post additional information as it becomes available.

The U.S. Court of Appeals for the Second Circuit denied the government's motion to stay the nationwide preliminary injunction issued by the Southern District Court of New York. The court set an expedited briefing schedule with the last brief due by February 14, 2020, with oral arguments to be scheduled “promptly after.”

On October 11, 2019, the U.S. District Court for the Southern District of New York enjoined and restrained the Department of Homeland Security and USCIS from “enforcing, applying, or treating as effective” the DHS Public Charge Final Rule. In addition, the court specifically enjoined the government from implementing the use of any new or updated forms whose submission would be required under the Final Rule, including the Form I-129, Form I-485, Form I-539, Form I-864, Form I-864 EZ, Form I-944 and Form I-945. 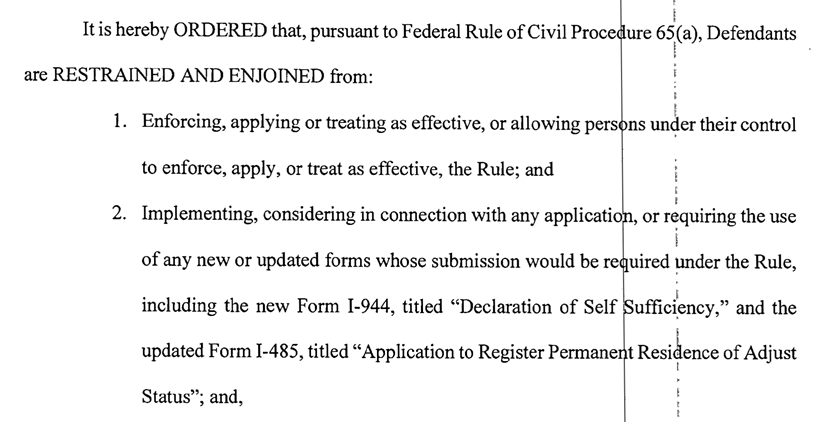