Back in 2015, EOIR used a “parking date” of November 29, 2019, to help manage its immigration court docket. Numerous hearings were temporarily scheduled on this date - the thought was that these hearings would ultimately be rescheduled. AILA is trying to gauge if these hearings have been rescheduled. Please submit your examples if you have a hearing on that date. 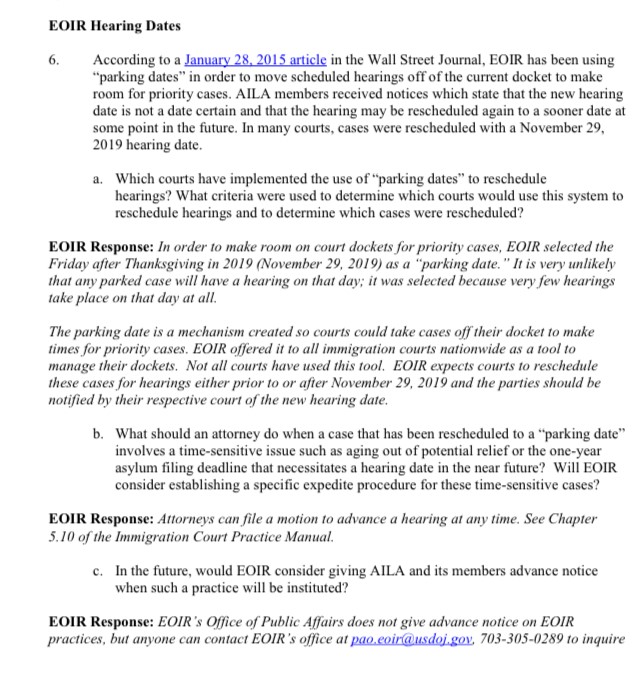 AILA National is trying to determine if there has been a recent increase in notices issued with fake hearing dates. Please complete the survey below if you have received such a notice listing a date that appears to be fake (e.g., not listed in the 1-800 EOIR system).

Attributable to the Executive Office for Immigration Review:
On Thursday, Jan. 31, 2019, the Executive Office for Immigration Review (EOIR) was unable to proceed with hearings for some respondents who believed they had hearings scheduled on that date. In some cases, the cases had been rescheduled to another date, but the lapse in appropriations prevented the immigration courts from issuing new hearing notices far enough in advance of the prior hearing date. In other cases, EOIR did not receive the Notice to Appear (NTA) in a timely manner. Immigration proceedings do not commence until the Department of Homeland Security (DHS) has filed an NTA with an immigration court. Consequently, even if a hearing time and date has been provided to a respondent on an NTA, the hearing cannot go forward until the NTA is actually filed with an immigration court. Finally, weather-related closures at many courts on Jan. 29 and 30 also impeded EOIR's efforts to process and prepare cases scheduled for Jan. 31.

As EOIR announced on Dec. 21, 2018, all three DHS components with responsibility for issuing NTAs now have access to its Interactive Scheduling System (ISS), and it will no longer provide dates to DHS outside of ISS for scheduling initial non-detained hearings. Accordingly, EOIR does not expect any further recurrence of this type of situation.

For additional information, please see EOIR Policy Memorandum 19-08. All individuals who have been served an NTA with a hearing date and time on it are encouraged to contact EOIR's Automated Case Hotline at 1-800-898-7180 for up-to-date information on case status. If no information is found concerning a correctly-entered alien registration number and the scheduled hearing is less than 10 calendar days away, the individual is encouraged to contact the DHS office that issued the NTA or the relevant immigration court.

The next upcoming date on NTAs that appears to be fake is this Thursday, January 31, 2019.

In response to AILA National's question about Notices to Appear (NTAs) issued with a hearing date notice of January 31, 2019, EOIR Headquarters issued the following public statement:

In response to your question about NTAs issued with a hearing date of tomorrow, as noted in Policy Memorandum 19-08, "[a]ll individuals who have been served an NTA with a hearing date and time on it are encouraged to contact EOIR's Automated Case Hotline…to confirm the time and date of any hearing listed on an NTA. If no information is found concerning a correctly-entered alien registration number and the schedule hearing is less than 10 calendar days away, the individual is encouraged to contact the DHS office that issued the NTA or the relevant immigration court." As such, please call 1-800-898-7180 (800-828-1120 TDD) to check to see whether a particular case is scheduled at the immigration court. Also, be sure to check our Twitter and Facebook accounts for the latest information about court closures as there are several already announced for tomorrow.

If you have a client who was originally scheduled for a hearing on January 31 and has since been rescheduled with the issuance of a hearing notice or through the 1-800 EOIR system, please fill out AILA's survey below. If your case remains scheduled for January 31, 2019, with no change, then please complete the survey on or after January 31 to inform AILA of the resolution of your case matter.

As EOIR also notes, please make sure to check EOIR's Twitter and Facebook accounts for the latest information about court closures.

If you post photos or videos on social media be sure to tag @AILANational on Twitter, Instagram, and Facebook so we can share them. If you would like AILA National to share photos/videos with press or on AILA's social media accounts please email AILA National directly and include a quick note about what court/city the photos/videos reflect. Remember to not take photos of individual's faces without their permission. By emailing this information to AILA National, I give AILA permission to share this information with the press, on social media, and in other AILA materials.

Following the Supreme Court's decision in Pereira v. Sessions, 138 S. Ct. 2105 (2018) (holding that a putative notice to appear that fails to designate the specific time or place of a noncitizen's removal proceedings is not a notice to appear under 8 USC §1229(a)), DHS began issuing some Notices to Appear (NTAs) with fake hearing dates and times. Without consulting with the immigration courts, DHS or EOIR appears to have arbitrarily chosen fake dates and times for upcoming hearings in removal proceedings, perhaps in a misguided attempt to comply with Pereira v. Sessions.

Previously, AILA members have reported that their clients have received both NTAs listing fake times/dates outside of normal court operating hours - such as a hearing time of midnight or a hearing on a date that does not exist - as well as times/dates that may not appear to be obviously fake, but are not scheduled in the EOIR system. Many respondents with these fake time/date NTAs have appeared at court on the date and time listed on their NTAs, only to discover that their NTAs have not been filed with the court or that their hearings were scheduled for different dates. Immigration courts have confirmed that the times/dates are not real. The AILA EOIR Liaison Committee suggests AILA members to call the EOIR 1-800# or access their online EOIR account to confirm the accurate date and time for their clients' hearings.

On October 31, 2018, AILA members reported to AILA National that they were experiencing extraordinarily long lines outside of the following immigration courts across the country: Atlanta, Boston, Charlotte, Orlando, Chicago, Los Angeles, Dallas, Phoenix, Houston, Baltimore, and San Diego. Many of AILA members appeared at immigration court with their clients who were carrying Notices to Appear (NTA) issued by DHS with the fake date of October 31st, 2018. The government's implementation of the Supreme Court's decision in Pereira, continues to be chaotic and has caused nationwide confusion.

On Wednesday, October 31, 2018, CNN initially reported this story, 100+ immigrants waited in line in 10 cities for court dates that didn't exist, and asked EOIR, USCIS, and ICE for comment. EOIR and ICE did not provide a comment at the time but USCIS stated the following:

On late Friday afternoon, November 2, 2018, Department of Homeland Security and Department of Justice issued a joint statement to CNN and said the confusion was a result of "minor logistical errors."

According to CNN, "officials haven't responded to questions about why this occurred, how many people were affected and what steps they plan to take going forward."